Gently gently as I start to do fairs again.....

So guess who had a great idea ..?....I thought I would go down to Ardingly in June to see if I could buy some new stock....and I then had the brilliant "cunning" plan to also load my van with stock , buy a pitch outside and then when I had finished buying, unload my stock onto three tables, set up on the grass and sell for the rest of the two days ....big mistake as nature had a "cunning" plan too....I turned up at Ardingly on the first day at 5am to be met by a very wet morning and also blowing a small gale....not to be deterred I donned raincoat and went on my search for stock....thinking it is bound to stop by 9.am when the public come in..!  I met a friend of mine from Wales who had the bright idea to have a small marquee to sell from....he said have a coffee as you look rather damp....he fell about laughing when I told him I had a pitch outside, as he had just checked the weather app and the rain was due to stop around 1pm.... not put off I went into the barns in my pursuit of stock and to get out of the rain....by 11am I thought I just cannot put my lovely stock outside, so I ran to the sales office and asked if they had any pitches left in the Jubilee Hall....luckily they had one left, so I bought it and drove over to the hall and started to unload onto my pitch....as luck had it the pitch was big enough for three tables, so I could unload all my stock....and then wow what a revelation....as my usual pitch was in the Norfolk Pavilion, I had got used to not seeing crowds of people.....the punters flocked in , all hungry to buy and I suddenly was having one of my best Ardingly Fairs....one lovely lady said to me, that she had not seen me before....I said I was always in the Norfolk Pavilion,(for the last seven years) to which she replied. "we never go in there as by the time we have done all these halls and outside, we have had enough or run out of money"....!

So from now on I am always going to be in the Jubilee Hall....I did Ardingly again in July....in the Jubilee Hall and once again I was so surprised to see the punters flock in....and this time the fair was better than June....,probably because I had set up by 8am to catch the early trade.....on conclusion it is an ill wind (or rain) that doesn't do some good somewhere for someone....!

On the purchasing front my most exciting find was a rare pair of Charles 1 Oak Joyned Benches which sold almost straight away to a good collector....just shows that early pieces are still in great demand...!

Take care and I look forward to seeing you at the Southwold Fair in August....or Ardingly and then Shepton in September.....see my fairs section of the website to see where I am next.....I cannot wait to see all my loyal customers again..! 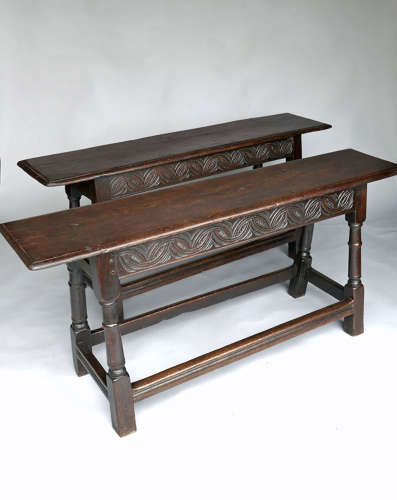