Snow,Frost and then the Sunshine on a busy Builth Wells Fair

Quite a hectic few days at Builth Wells in Wales, I arrived at 9.30am Friday morning having left home at 6.00am full of anticipation and wasn't disappointed....unloading and set up was quite easy having found my stand was quite close to the door I had parked by.  After unloading I went for a quick walk around the fair to see what I could find...I soon found a good dairy bowl dated 1824 and a larger Scandinavian Bowl which I purchased and no sooner as I stepped outside the barn, a dealer spotted the dated bowl and straight away bought it...I thought this is a very good start....back to the stand for a bit more setting up and then off around the fair again, as all the time dealers were coming in....it wasn't long before I found a small 17thc Oak Coffer which I purchased....this went on all Friday and I bought a good shoe snuff, a side handled food bowl, a spice grinder and an 18thc Oak cutlery tray....setting up finished about 6.00pm....

On Saturday the public poured in, ( the show is only twice a year, so a lot of people look forward to it)....my first sale was a large dairy bowl to the trade followed by a Welsh Oak wall tidy, two snuff boxes and  to finish a good first day, an early 18thc Oak Cricket Table, that happened to be Welsh..!

The second day I awoke to a frost and could see the snow on the black mountains as I drove in, a wonderful sight....the day turned into a beautiful sunny May day and again the public came through in large numbers, although not in a buying mood, but the day was saved by the sale of a very good large Muffineer and a very small Dredger....which turned the fair into a profitable first outing in Wales.....I have booked up September and can't wait to return..!

My next outing is nearer to home at Newark at the end of May...hopefully see you there, in the meantime I am hopefully going to get some more purchasing in, .....if the weather improves..! 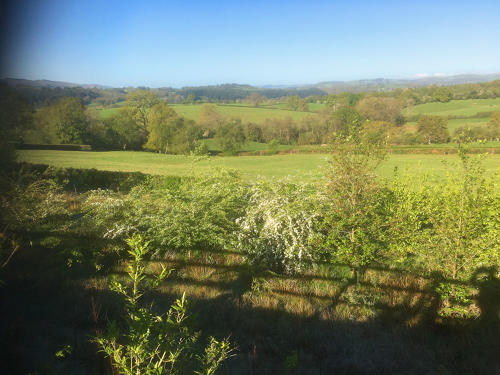